The Lemon Bay Playhouse announces its upcoming show, “Tuesdays with Morrie”. The play, the fifth production of the season, was written by Mitch Albom and will be directed by Ric Goodwin. Ric is also the Artistic/Production Manager for Lemon Bay Playhouse. The performances will run from March 8 through April 2, 2017.

This strong and touching drama tells the autobiographical story of Mitch Albom, an accomplished journalist driven solely by his career, and Morrie Schwartz, his former college professor. After a 16 year separation, their rekindled relationship turned into one final ‘class’: lessons in how to live. The pair journey down a path in which the older man passes lessons of life to the younger man, who will always remember his Tuesdays with Morrie – an inspiring and unforgettable evening of theatre.

As a director, one of Ric’s primary obligations is to attempt to get the audience to suspend their disbelief and draw them into “the world of the play.” With most of the plays you see at LBP, the directors use “realism”, such as realistic settings. Plays are presented as if you are looking through a fourth wall into the setting of the play. Realistic props such as telephones that ring and radios that play, etc. are examples that directors will use as visual reinforcement in telling the story.

Ric has chosen to go in a different direction with Tuesdays with Morrie. He would ask you instead to focus on the two characters and the inspiring and poignant words they are sharing with you. At times they will talk directly to you; at times to each other face-to-face. And at times, incorporating a theatrical technique called offstage focus, they will project the characters they are talking to out and above you. Some props you will see; others will be pantomimed and seen with your mind’s eye. Places in the play will be suggested and through the dialogue become obvious.
So he asks you to join him on this less-is-more, minimalistic journey, as we share this beautiful story that Mitch Albom and Jeffrey Hatcher have given to us. 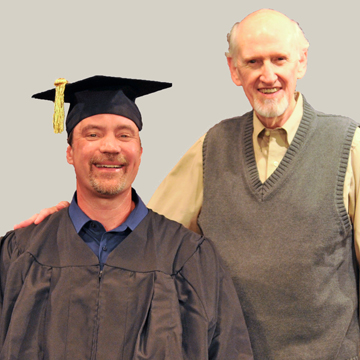