This is a wonderfully dynamic one-man presentation of our 33rd President who was a haberdasher, farmer, WWI soldier, and U.S. Senator. Harry Truman was a common man with common sense, who was an open, outspoken, and honest politician. He confronted some of the most critical problems of the past century. He never stopped “shooting from the lip” about the issues he faced and the people he faced up to. His comments on the leading political figures of his time are perceptive, deliciously candid, and sometimes downright prophetic.

Theater critics have called Jack’s stage work “Riveting”, “Emotionally honest”, and “Inviting the audience into the character’s soul”. Jack brings honesty and passion to his portrayal of President Harry S. Truman and lets Harry speak for himself. 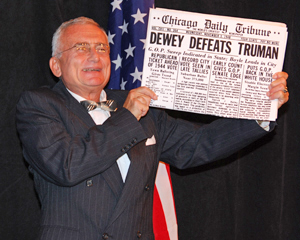